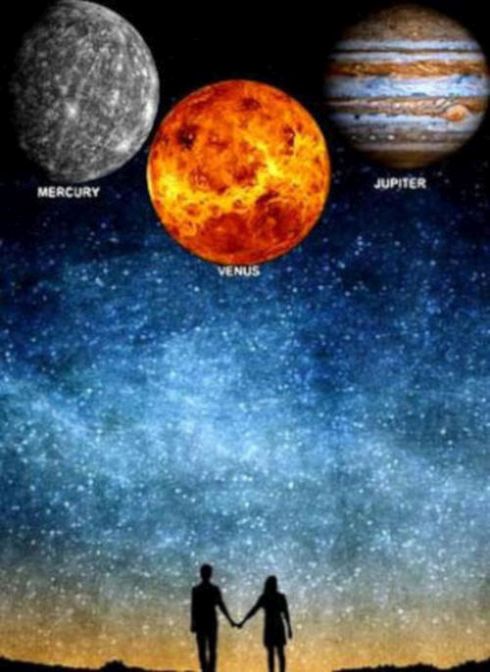 3 benefic planets Mercury, Jupiter and Venus transit in 6th, 7th, 8th houses from natal moon for Capricorn (Makara), Aquarius(Kumbha), Pisces(Meena), Aries(Mesha) during June-November forming Adhi Yoga 2016.
This rare combination is called Adhi Yoga, which can be seen in horoscopes of billionaires like Bill Gates, Anil Ambani etc.
Mercury joined Venus in Gemini on 27th June 2016 and formed Adhi Yoga for Capricorn (Makara Rasi) born people.
This effect continued till 10th July with Mercury in Gemini, Venus in Cancer, Jupiter in Leo, which are 6,7,8 houses for Capricorn.
Since then, partial Adhi Yoga is in effect for Capricorn and Aquarius moon signs.

Next 4 to 5 months will see much rise in activity level at work, position & gains, as Adhi Yoga kicks in. This planetary combination is known to bring untold riches, rise in power & status and one does well in his profession, embarking higher roles & responsibilities during Adhi Yoga lucky period.
Adhi Yoga will be at peak for Meena Rasi (Pisces moon sign) born between 01-11 August 2016 when all three planets Mercury, Jupiter and Venus will transit their 6th house together.
Adhi Yoga 2015 has already shown its effects on Sagittarius, Capricorn, Aquarius and Pisces last year.
Now it is the turn on Aries to experience its effect.

Between 19 September – 03 October 2016, Pisces moon sign born will experience an exceptional period, both professionally and financially.
Generally, if a natural malefic like Rahu or Saturn is conjunct one of these 3 benefic planets while forming Adhi Yoga, mixed results can be experienced.
This applies to Meena Rasi, as Rahu will be conjunct Mercury during this period.
Malefic planets occupying 6,7,8 houses will also give rise to Adhi yoga but the person will be evil minded and tyrannical. If benefics and malefic are thus placed then mixed results will ensue.
Both Pisces and Aries moon signs will continue to experience Adhi Yoga 2016 effects until 20th october.
Between 21 October – 07 November 2016 Aries will be blessed with Adhi Yoga as Jupiter in 6th, Mercury in 7th and Venus in 8th (conjunct Saturn) deliver their effects.

This yoga is particularly applicable only to those who are awaiting a big break in their profession.
Long pending promotion or increment or even a new business establishment can happen during this period.
This combination with Venus, Mercury & Jupiter marks a phase of luck & happiness for Meena and Mesha rasi people during september – november 2016.
Adhi Yoga gives a rare ability of inspiring respect & admiration from others and a rise in benign & humanitarian nature due to the involvement of Jupiter.

One rare and much awaited oppurtunity will come up during above mentioned time period and if properly utilized, it will change your lifepath for many years to come.
Make the best out of this chance to build a prosperous career.
With Venus in its own sign Libra and Jupiter in Virgo, creative people will get oppurtunities to exhibit their talent during September – October 2016.

These 5 months (June-November 2016) will be testing time for Libra (Thula Rasi) born natives.
Jupiter in their 12th house will create few family, financial and health troubles.
Too many planets around their house will keep them restless and in some confusion. Frequent visits to hospital (for self or family members), medical expenditure, death or birth related karma in close relations will be experienced.
Scorpio (Vrischik Rasi) will have some relief after their house lord Mars leaves its long stationary and Saturn conjunct period on 18 September 2016 and enters friendly Sagittarius.
However, there can be some unexpected or unplanned expenditure during last 2 months of this year.