Solar Eclipse occurs on 26 February 2017 when Sun is conjunct with Moon and Mercury in Aquarius, along with Rahu, aspected by Rahu and Saturn according to Vedic Astrology.
This eclipse is visible from South & West Africa, Much of South America, Pacific, Atlantic, Indian Ocean, Antarctica. 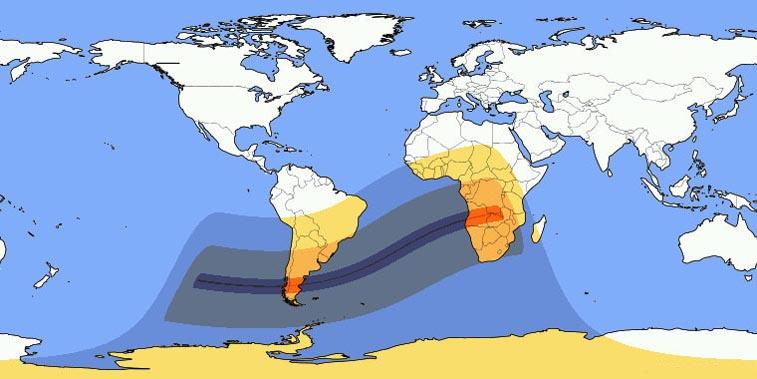 An annular solar eclipse occurs when the Moon’s apparent diameter is smaller than the Sun’s, blocking most of the Sun’s light and causing the Sun to look like an annulus (ring). An annular eclipse appears as a partial eclipse over a region of the Earth thousands of kilometres wide.
This Solar Eclipse will begin at 12:10 UTC with first location seeing eclipse at 13:15.
Maximum Solar Eclipse occurs at 14:58 UTC, while last location in South America sees eclipse at 16:31 UTC.
Eclipse ends at 17:35 UTC. Entire solar eclipse lasts for 5 hours 25 minutes.
In the image above, areas falling under the thin red line can see total eclipse.
Areas falling under the thick outerline to redline can see 90% of eclipse.
Areas falling under thick blue strip can see 75-80% of eclipse.
Areas falling under yellow color can see upto 40% of the eclipse.
Places which can see total solar eclipse : Only, those who live around Coyhaique, Chile can see annular solar eclipse.
Places which can see partial solar eclipse : Santiago in Chile, Punta Arenas in Chile, Buenos Aires in Argentina, Stanley in Falkland Islands, Montevideo in Uruguay, Rio de Janeiro in Brazil, Lilongwe in Malawi, Jamestown in Saint Helena, Johannesburg in South Africa, Maputo in Mozambique, Gaborone in Botswana, Windhoek in Namibia, Bujumbura in Burundi, Opuwo in Namibia, Harare in Zimbabwe, Lusaka in Zambia, Lubumbashi in Congo Dem. Rep., Luanda in Angola, Kinshasa in Congo Dem. Rep., Brazzaville in Congo.

This eclipse starts at one location and ends in another. It is not seen is Asia, Europe, Australia and North America continents.

Both Moon and Sun will be on constellation of Satabhisha nakshatra along with Ketu during this eclipse.
People born in Aquarius moon sign or Ascendant (Kumbha Rasi or Lagna) will have few physical and psychological ailments if they live in above stated places during eclipse time.
Solar Eclipses, especially in signs owned by Sun itself, will cause low self esteem, blood pressure variations, skin allergies, heart and lung problems, slow digestion and this eclipse influences people born in ascendants and moon signs of Cancer, Leo, Libra, Scorpio, Capricorn and Pisces.

Venus and Mars are squaring Saturn, which causes unexpected and strong forces influencing love and sexual feelings among strangers.
If you are born under moon signs of Aries, Virgo or Sagittarius, then expect some good relaxing time towards end of this month.
As Saturn aspects Sun, Moon, Mercury and Ketu during this annular solar eclipse, Murphy’s Law takes over this month and according to it, Anything that can go wrong, will go wrong.
So, avoid all that is immoral or against the law. Remove those negative thoughts from your mind, as they might come true !

If you are born with Moon in Arudra, Swati or Satabhisha constellations, Aquarius Ascendant or Moon Sign or going through Vimsotari Dasa or Bukti of Sun, then February 2017 is the month to be cautious in every aspect of life.
Double check everything and take nothing for granted for next few weeks.
There will be some disappointments in relations, finance and career planning.
Politically, they will create unrest in civil life in countries where eclipse is visible even partially.
Internal wars, low economy will hit these countries.