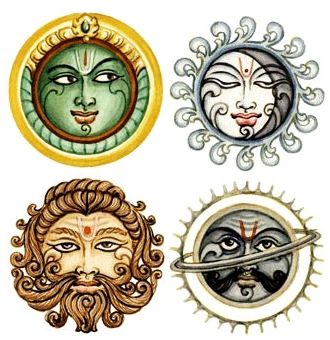 Rare Maha Yoga, which occurs once in 2500 years, happens in between 14-16 September 2014 which leads to incarnation of a highly evolved and awakened soul on earth.
Four exalted planets (Moon, Mercury, Saturn, Jupiter), along with two powerful planets in own signs (Mars, Sun) and Rahu, Ketu placed in their friendly, comfortable signs with their signlords exalted.
At the same time, the only left out planet Venus will transiting in its own nakshatra (Poorva Phalguni) in Leo (Simha Rasi).
Astrologically, such rare combinations have been repeating in a gap of two-and-a-half millennia, approximately. Interestingly, this combination of planets is being formed when the Supreme Divine chose to incarnate in human form or a highly evolved soul decides to take birth on our planet.
Horoscope of Lord Rama had four exalted planets and two in own signs.
Moon in Taurus, Mercury in Virgo, Jupiter in Cancer, Saturn in Libra, Sun in Leo, Mars in Scorpio, Rahu in Virgo, Ketu in Pisces is a very rare combination of planets in Vedic Astrology.

If a child is born while Moon is highly exalted and in own nakshatra (Rohini) between 19:16 IST on 14 September – 20:23 IST on 15 September 2014, then he/she will enjoy benefits of this rare maha sanyoga.
Such a kid born under favorable lagnas of Taurus, Cancer, Leo, Virgo, Libra, Scorpio, Pisces will grow up to become a great spiritual leader or an icon.
This child will create history in his/her own field and line of expertise.

When such a highly “Awakened Being” is incarnating on earth, any new work/project started will lead to a new beginning, a new learning experience, shall have all have Divine Protection, also will show excellent and steady growth for a longer period of time.
Try meditating and connecting to the Divine Supreme Energy (using Light Channelling Method) during these hours and it can bring you beautiful insights and direct Divine connection, especially between 9:30 – 11 PM IST (on the 15th) and from 2-3 AM IST (on the 16th), when the ascendant becomes stronger and the all nine planets are placed in their best possible combination.

Few may assume this to be an ideal planetary combination for Lord Kalki to be born.
But Kalki Purana states :

12th of the first part of the moon cycle in the month of Chaitra (First month of Vedic Hindu New Year which starts in between March/April) Lord Krishna (as Kalki) arrived, then the father was mentally overwhelmed by the son being born. This also means that Sun should be in Aries during the time of his birth.

More than 2500 years back, birth chart of Lord Buddha too has similar planetary transits.
Buddha has 5 planets together in his Tenth house, indicating spiritual insights and his own enlightened Kingdom.

If you are an expecting mother and estimated date is around 14-15 september 2014, then your family will be blessed with additon of an enlightened soul, if birth happens in above stated lagnas (ascendants).
This is also an excellent time for us to meditate and connect to the supreme soul, start a new project, have a new beginning in various aspects of your life, health, love, relationship, business or education, and with the will of God and the powerful energy combination of all these planets, we will surely find success once we connect to the higher energy this month.