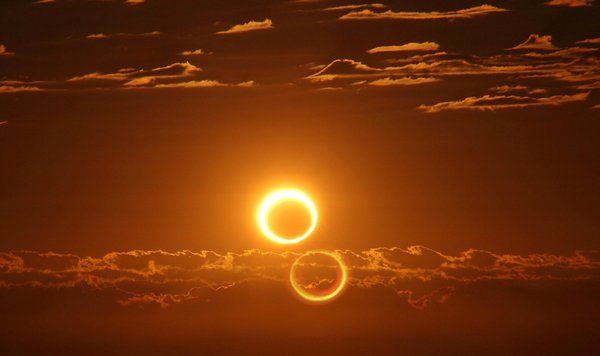 Annular Solar Eclipse will occur on April 29, 2014 as center of the moon’s shadow misses the south Pole of the Earth.
This solar eclipse will be visible from parts of Antarctica and North Australia, where eclipse begins in evening and ends before sunset.
Rest of the world cannot see this eclipse.

Timings of major phases of this eclipse are :

This Solar Eclipse will be occuring on a newmoon day, when 7 planets will be influencing Libra and 6 planets will be influencing Aries.
This eclipse occurs when Moon transits Aries (Mesha Rasi) and Bharani constellation, while Sun conjuncts Ketu (south node of moon).
The most badly hit sign during and after this eclipse will be Aries, which has 4 planets (Sun, Moon, Mercury, Ketu) cojunct in it.
Libra with Rahu and retrograde Saturn will also get partially effected but due to positive aspect of Jupiter, lot of negativity gets nullified.

Also if you are going through Venus (Sukra) Mahadasa or antardasa, which is already showing bad results, they will be intensified in May 2014.
This Solar Eclipse causes ill-health, sudden loss of money or uncontrollable financial transactions, insomnia, disturbed mind for people born in ascendants and moon signs of Aries, Leo, Virgo, Libra, Capricorn and Pisces.
However, Librans and Leo can expect to be saved to some extent and can also expect few sudden positive changes due to Jupiter’s positive influence.

People born with Moon under Bharani nakshatra or their Ascendant in this constellation will face severe pressure on mind and body during the month of may.
The impact of this eclipse will last for 2 to 3 weeks after it occurs and it will be more on people who live in australia and lessens on people who live in countries which are at greater distance from antarctica and australia.

Sun conjunct Ketu reduces self esteem, self confidence and can even promote suicide tendencies.
If you are born with this conjunction close to your Ascendant in your horoscope, then May 2014 is the most testing month for you in recent times.
You can feel lazy, lethargic, tired for no reason, drowsy and depressed frequently.
Proper medication, diet with balanced nutrition, moving around with positive people can keep you active.
Mercury conjunct Sun and Ketu, and Moon being completely combust can also promote depressive thoughts, escapism, useless discussions, oversleeping etc.

Usually, Solar eclipse tends to increase attention to material things. So, Be careful of overeating and overspending till mid-may.
If people around you turn to be a little more stubborn, this is the time to just give in.