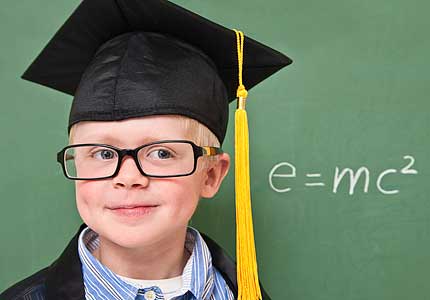 Most important house to look at is the 5th house, which controls mind.
It is also the house of Poorva Punya (past life/lives credit), which can be manifested in this life in form of intelligence, creativity, love relations, luck in speculations, children, reaching right gurus for initiation of mantras, siddhi etc.
Also, Jupiter, the planet which controls wisdom needs to influence this 5th house or mercury or moon.

There are few yogas like Budha-Aditya yoga mentioned in astrology but in experience they rarely work.
This Budha-Aditya yoga is seen in a horoscope with Sun (Aditya) and Mercury (Budha) are conjunct in a sign.
Mercury is always within 30 degrees from Sun during its transit. So, this conjunction can be seen in many horoscopes.
Kalidasa mentions that this conjunction should occur in 1st or 3rd or 8th houses from ascendant (lagna) for Budha-Aditya yoga to function.
But in reality, it was seen as intelligence getting wasted or tending towards perversion, based on various other factors like aspects or conjunctions of other planets, and mercury being completely combust due to Sun’s close proximity.
For Budha-Aditya yoga to fully function positively, neither planet should own 8th house in a horoscope (that means, it applies only to Aries, Taurus, Gemini, Leo, Virgo, Libra, Sagittarius and Pisces ascendant borns) and these 2 planets must be free from conjunctions or aspects of Rahu, Ketu and other malefic planets (depending on ascendant).
In general, they should be free from any 3rd planet in the sign in which they are placed and should not be heavily influenced by any negative aspects.
Also, Mercury should be more than 14 degrees away from Sun, to avoid combustion.
Now, Sun and Mercury to be in same sign, without any other planet’s influence and more than 14 degrees away, is a bit of rare occurance, which indicates intelligence.

Also, Sagittarius (ruled by Jupiter) is regarded as the most intelligent among all 12 zodiac signs.
Persons born in Leo Ascendant have their 5th house in Sagittarius and if their em>Budha-Aditya yoga satisfies above conditions, then they will have shrewd intelligence.
But this will function fully only in vimsottari dasas of Budha(Mercury), Surya(Sun), Kuja(Mars) & Guru(Jupiter) for them.

Other General Combinations indicating Intelligence in a Horoscope