« on: November 07, 2010, 04:35:18 PM »
For Hindus especially, Nostradamus ought to be a hero of immense cheer. The Frenchman never visited India. In point of time, his forecasts were published well before Akbar became the Moghul ruler in Delhi. But, despite the great distance of time and space, Nostradamus clearly foresaw the rise of a mighty all conquering Hindu nation. Its birth is close at hand. The seer predicts that a resurgent India will burst forth upon its former oppressors and destroy them completely.

The beginning of this terrible revenge will be in the seventh month of 1999.

Meanwhile, he predicts, after seven years of furious warfare, the Moslems will be totally wiped out. There will be no trace left of either Mecca or Medina. Somanath will be avenged a billion times over. The creed of Muhammad will vanish forever. The European countries who despoiled India will not be let off either. Flames will engulf Rome as Hindu soldiers advance on Paris overcomming the barrier of the Alps. The Pope will fly from his lair. Much of Europe will repudiate the false tenets of Christianity. The ancient sway of Hinduism will be restored. Vedic chants will again fill the air.

« on: November 04, 2010, 05:18:03 PM »
Grounding exercise will release all negative energies from body and will relax all chakras so that you can feel good within 5 minutes.

Stand barefoot if possible so you get a good contact with your feet and the ground. Feet a bit apart, as much as it feels comfortable to you, usually about a foot, but less will also do. Straighten up your body, let your arms hang along your body, palms inside.
Close your eyes if that helps you to concentrate.
Feel energy coming up from the ground into your feet. Grow roots from your feet downwards into the ground. Think about them.
How are they? Thin, thick, straight, contorted, spread out?

Once you have imagined your roots start to feel them and draw up energy through them.
You\'ll feel it in your feet and then little by little use your thought and your breathing in to draw it up through out your body and the chakras

If you can manage that feel the energy going out gently from the top of your head.
Your arms and hands should feel very relaxed and heavy, warming up little by little.
Pull the energy up to your elbows and shoulders. If you find it difficult just imagine your blood flowing and you\'ll feel it ok.
Stay there, grounded for a while, as much as you like or it feels comfortable.

Then, little by little start moving your fingers, your hands, feel your feet and then as last open your eyes.
It is a very simple exercise and it will make you feel so much better!
Try doing that when you get out of bed in the morning or anytime you feel stressed out! You won\'t imagine, but I can do that sitting on my office chair as well and that works wonders!
13

« on: October 31, 2010, 05:51:05 PM »
There are intellectuals and astronomer buffs who thoroughly trash and denounce this information. This is to be expected. I believe this information to be true partly because it has NOT been widely disseminated to the masses, and mostly because I trust my own resonance with it. In addition, I have encountered this information via many different sources, from ancient to modern, and the results of this \"cross-checking\" wavers only in the matter of specific dates.

For example, many predicted that these events would take place by the year 2000. We\'re still here. That doesn\'t mean that it\'s not going to happen. Well, even an earth year is not exact - 365.25 days. I feel that we are more than likely in our final \"point two-five\" portion of this event; \"bonus time\", if you get my drift.

For all who may have doubts, I ask that you not be swayed by the opinions of others. This information has to be \"sought out\", considered, then accepted or rejected PERSONALLY by each and every one of us. Only by PERSONAL seeking will we be able to save ourselves. Our Controllers will continue to do all they can to cause us to doubt ourselves and discourage us from this seeking.

That Still, Small Voice is the real \"YOU\" and it will never lie to you.

« on: October 31, 2010, 05:47:22 PM »
On December 21, 2012 at 11:11am (Universal Time), our Sun will rise over the Giza Plateau, home of the Great Pyramids and the Sphinx. The Winter Solstice will have commenced. This is not all that will occur. At that moment, the Earth and its Sun will be aligned in straight line with Galactic Center of the Milky Way. As a result of this Cosmic alignment, tremendous energy will be transmitted from Galactic Center through the Sun to our Earth.

What will happen? I don\'t claim to know completely. I know what I have been able to put together from years of research without and seeking within. I have my own opinions, one of which is that Earth will be completely immersed in its new dimension at that time. The question arises, what will have happened to us?

It is a not too well-known fact that this Solar System orbits another sun, or star. That star is named ALCYONE, located in the constellation of Pleiades. This constellation carries the ancient nickname of \"The Seven Sisters\" and is named so because of the seven major stars that make up this star system. Earth is known by the ancients to be the esoteric \"Missing Sister\".

The central Sun of the Pleiades, Alcyone, is the Sun that our entire Solar System revolves around during a precessional cycle of 25,920 years (Minor Cycle). It takes over 200 million years for our Solar System to complete an orbit of the center of our Milky Way Galaxy, a.k.a. \"Galactic Center\" (a Major Cycle). We are now nearing the end of BOTH of these important cycles, and the end date has been determined to be December 21, 2012.


HUMANITY AND THE PHOTON BELT

There is a band of energy that emanates from and surrounds Alcyone. This band is extremely large in astronomical terms. It is made of light, or photons and has become known as The Photon Belt, or Manasic Ring (see illustration). Earth entered this belt of photon energy in August of 1987. We are being enveloped by it more and more each day. Symptoms of our immersion in the Belt are the phenomenom that our Controllers have tricked us into referring to as \"Global Warming\".

Several planets in our solar system are heating up, ice caps are melting on Mars, etc. Even the Sun is behaving curiously. We are moving deeper into this belt of photon energy.

A major event is set to occur once our Solar System reaches a critical position within the Photon Belt. This position is known as \"The Null Zone\". When the Null Zone is finally breached, the reality of what has been written, channeled and received will dawn upon humanity like a sledgehammer. At that point in time, everyone on Earth will know \"what time it is\". Humanity will realize that all the prophecies were made for us, and that they have always been true.
15

« on: October 31, 2010, 05:45:48 PM »
The energy of the photon belt may account for:
-Global Warming
-Sun’s decrease in magnetics
-The shift or change of all planets in our solar system
-The birth of indigo and crystal children
-The introduction of new species that is now happening
-The breaking up of the illluminati/satanic worldwide control network (banking/drug/weapons/uranium/mind control/chemtrails/media/education) that is currently festering humanity like a parasite or a virus.
-Humanity’s spiritual awakening
-The warming of the globe’s temperatures
-Humanity’s increased communication with mother earth our planet….(she has a message….if you feel called to move from your location, then do so….it might be a very good idea).
-The visitation from off worlders, to earth….this could literally happen at any moment and in fact, it might be a good idea to ask for God and All His Heavenly Hosts to offer their guidance…

« on: October 31, 2010, 05:43:42 PM »
The photon band is a quantum (smallest particle) of electromagnetic energy with zero mass-no electrical charge and an indefinitely long life time. This photon band was first discovered in 1961 by means of satellite borne instruments. About every 26.000 years our Earth travels twice through this higher frequency band, affecting the material world and our consciousness. In 1987 our Earth entered for the first time again in this band and every year she is moving in-and out with each year staying longer in this higher frequency band, as our solar system is travelling through this particular area within our Milky Way Galaxy. In December 2012 , according to Mayan calculations, our sun and Earth will be submerged within this band, without leaving again into the Galactic night.

It is the date when the Maya calendar ends and a new world begins. Mayor cycles are closing at the same time; one of 26.000 years, one of 104.000 years, and one of 225.000.000 years, giving birth to new species and a new Heaven and Earth. In December 1998 our sun entered for the first time again in this photonic band and has been prepared to adjust to this higher frequency. All what is happening outside is also happening inside of us. We are adjusting internally on a cellular level to the external change which is experiencing our solar system, and including our Earth. 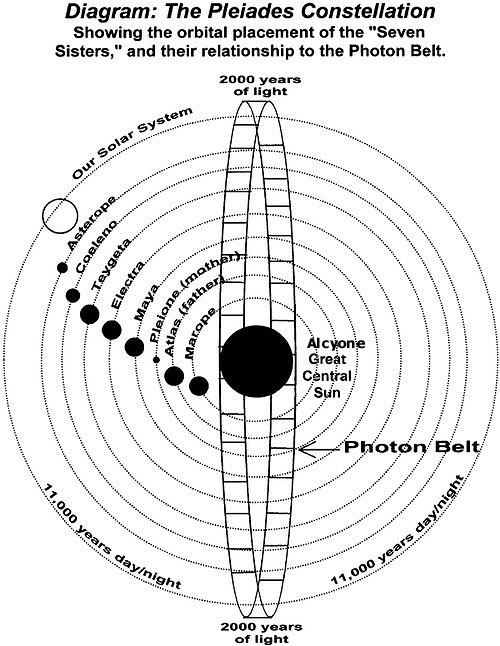