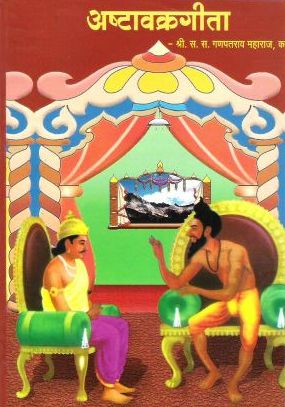 Once upon a time there was a student of the scriptures who could not support his family. He would work hard all day every day and then read aloud the holy language of sacred verses late into the night. His wife, round of belly with their coming child, would sit beside him in the dim room, listening as her weary beloved chanted the ancient words.

One late night in her eighth month a voice from inside her belly said to the father: Sir, please be attentive – you are mispronouncing that verse. Tired and short-tempered, without thinking why he would feel so enraged at being corrected by an unborn child, the father cursed the voice – and because the father had built up merit, his curse took hold: the child was born deformed, with eight crooks in his body. That child was called Ashtavakra, a name which means eight bends. Everyone who saw him laughed in derision.

That crippled child was an enlightened master who took birth in this family to reveal in simple words the essence of mystical experience. Janaka, king of the known world, father of the bride of God, Sita, daughter of the earth, that very King Janaka became this crippled boy’s disciple. The book based on that event is called The Song of the Eightfold Cripple, or Ashtavakra Gita.

Asthavakra was not keen on accepting students, and so had few. When King Janaka came to hear of the wisdom of the crippled child he approached the boy as a humble student, not a commanding king. The boy accepted the king instantly as his disciple.

This caused some talk in the sangham. “Ah, Ashtavakra does have favorites after all, he accepted the king without any of the trials he had all of us face!” This grumbling became a quiet force, and Ashtavakra knew of it.

One day the King was late and so the boy delayed his discourse. The moment the king arrived, Ashtavakra spoke: ‘This day I have had a vision, the capital city will erupt in terrible fires and earthquakes – all there will die. Those who have loved ones or valuables there must hurry now if they wish to save anything! All the monks left.
As the dust settled, only the boy and the king were sitting. The boy said softly, ‘Great king, is there nothing you would save?‘
Janaka replied, “My lord and my friend, you are my only treasure“.
The cripple nodded and softly said, “Well then if I am indeed your treasure, mount your horse now and go and gather my students back to me, tell them I have been mistaken, the capital city is in no danger. Take your horse, and go“. Rising to do as bidden, the King put his foot into the stirrup, and as he swung up over the saddle, realization dawned in his mind. He swallowed, looked about him at this new earth, heard new birds singing for the first time, and then looked at the cripple at his feet. The two looked at one another, and then the king left to find the other students. Once back, the other students grumbled at being sent about here and there on foolish errands. One or two however did soon understand why the master had chosen the king as a student in his own way. This is what was said that day, as all sat about and heard these words of nectarine wisdom.

I :
1. Janaka said: How is knowledge to be acquired? How is liberation to be attained? And how is dispassion to be reached? Tell me this, sir.

2. Ashtavakra said: If you are seeking liberation, my dearest one, shun the objects of the senses like poison. Draught the nectar of tolerance, sincerity, compassion, contentment and truthfulness.

3. You are neither earth, water, fire, air or even ether. For liberation know yourself as consisting of consciousness, the witness of these five.

4. If only you will remain resting in consciousness, seeing yourself as distinct from the body, then even now you will become happy, peaceful and free from bonds.

5. You do not belong to the brahmin or warrior or any other caste, you are not at any stage, nor are you anything that the eye can see. You are unattached and formless, the witness of everything – now be happy.

6. Righteousness and unrighteousness, pleasure and pain are purely of the mind and are no concern of yours. You are neither the doer nor the reaper of the consequences; you are always free.

7. You are the one witness of everything, and are always totally free. The cause of bondage is that one sees the witness as something other than this.

8. Since you have been bitten by that black snake of self-opinion – thinking foolishly that I am the doer, now drink the nectar in the fact that I am not the doer, and now be happy.

9. Burn down the forest of ignorance with the fire of understanding. Know I am the one pure awareness. With such ashes now be happy, free from distress.

10. That in which all this appears is but imagined like the snake in a rope; that joy, supreme knowledge and awareness is what you are; now be happy.

12. Your real nature is one perfect, free, and actionless consciousness, the all-pervading witness – unattached to anything, desireless, at peace. It is illusion that you seem to be involved in any other matter.

13. Meditate on yourself as motionless awareness, free from any dualism, giving up the mistaken idea that you are just a derivative consciousness; anything external or internal is false.

14. You have long been trapped in the snare of identification with the body. Sever it with the knife of knowledge that I am awareness, and be happy, my dearest.

15. You are really unbound and actionless, self-illuminating and spotless already. The cause of your bondage is that you are still resorting to stilling the mind.

16. All of this is really filled by you and strung out in you, for what you consist of is pure awareness – so don’t be small-minded.

17. You are unconditioned and changeless, formless and immovable, unfathomable awareness, imperturbable- such consciousness is unclinging.

18. Recognise that the apparent is unreal, while the unmanifest is abiding. Through this initiation into truth you will escape falling into unreality again.

20. Just as one and the same all-pervading space exists within and without a jar, so the eternal, everlasting Being exists in the totality of things.