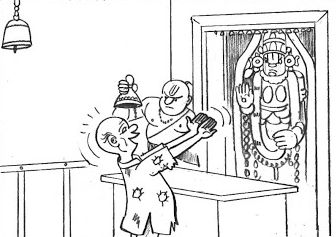 The devotion or love to the God involves both sides i.e., your love on God and God’s love on your self. The second love comes only when the first love is present. For the first love the worship of statue or photo is helpful. For the second love the worship of human form can only bring the result.
In worshipping the statue or photo you need not offer food as Naivedyam or Money as Dakshina.

But Rama and Krishna are not taking that.
Since, the priests and management is helping you to develop your love on God through the maintenance of statue or photo, you can offer them some remuneration.
But when you offer, beware that you are offering to the priest or manager. Let your offer be direct based on their merits. When they have no merits, do not offer anything in the name of Statue or photo.
Based on the deservingness of the priest you can offer anything.

If the priest is only to the level of a worker by cleaning the statue, you can treat him as equal to your servant washing your house and offer in the same level.
But since the priest is in the presence of the statue of God, you must show respect to him unlike to your servant. If the priest is of the level of a preacher, you can offer to your best.
Some times the priest may be the incarnation of God like Sri Rama Krishna Parama Hamsa.
Then you surrender every thing including yourself at His divine lotus feet. Thus, the priest may vary from an ordinary level of the worker to the highest level of human incarnation.

The priest should not feel great simply by his presence before the statue of God.
His greatness is recognised by his virtues and divine knowledge. The priest should not keep himself to the level of worker earning some lively hood in the name of the statue of God.
He should develop spiritually to the level of Sri Paramahamsa. Collection of offerings from the devotees should be direct.
Sri Shiridi Sai Baba was offered lot of money by devotees directly and He did not deceive the devotees by keeping any statue of God before Him. On analysis, one can easily find the intention of this drama using statues and photos of God. Actually the statue or photo indicates the human form of Lord only.

It indicates that you should search for the present human form of the Lord. Even the Siva Lingam of Lord Siva indicates the shape of wave, which means the life energy.
It concludes that the Lord is present in a living form. First the people worshipped inert objects like sun, river etc.
Later on the Siva Lingam appeared which indicated the life energy.

At last the statues and photos of human form appeared concluding that the Lord comes mainly in human form only.
In Gita the Lord mentioned that He enters the human body only.