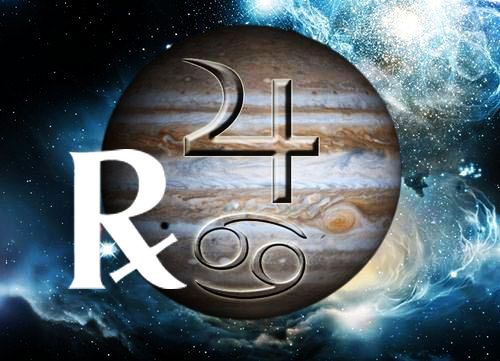 Exalted Jupiter will travel in retrograde motion between 01:20 IST on 9 December 2014 and 21:47 IST on 8 April 2015.
Jupiter has already entered into retrograde zone and started to slow down.
While Earth continues to move at normal speed, other planets can move in relatively lesser speed which make them appear as if they are moving backwards or retrograde.
Planets are never actually retrograde (moving backward) or stationary (stopped). This happens when Sun casts shadow on a planet making it appear as though it is stationary or that it is in retrograde motion.
During next 4 months, Jupiter goes back from 4th quarter of Aslesha nakshatra to 1st quarter of same constellation in same sign.
There will be noticeable changes in lives of those who have mercury as one of the ruling planet (either born on wednesday, born in ascendants or moon signs of Gemini or Virgo, born with moon in Aslesha, Jyeshta or Revathi nakshatras).

If you have recently started some new work and it got stuck, then next 4 months will be best time to finish them and see results between April-July 2015.
If Mecury owns or signifies benefic houses in your horoscope like 1,2,3,4,6,9,11 then expect highly positive changes to come after Jupiter goes direct again.
If you are going through Vimsottari dasa of Mercury and planning to start any new job or project or even make huge changes to your home or business, then it is advisable to wait till second week of April 2015.

Since Jupiter rules expansion and exaggeration, these regular turning-back periods are kind of like a self-cleaning oven: They keep things from getting out of hand. Retrograde motion slows down Jupiter’s tendency to make things bigger. It’s almost a sort of automatic braking system.
Saturn, which controls overall karmic effects on us also will travel in retrograde motion from mid-March 2015 and it is advisable to postpone major decisions to 9 April 2015, as two major planets in trine and retro will cloud your judgement.

Retrograde planet in your Natal Chart would account for why some things would come to you later in Life than others, such as a fulfilling relationship or marriage, financial abundance, career opportunities, education, children etc.
If Jupiter is retrograde in your natal chart, then you will face delayed results in one of these events : Marriage, Children, Financial Gains, Career or Business establishment, Long cherished dreams etc.
And every year’s Jupiter retrograde period of 4 months will prepare you for something better coming during its direct motion.

This Jupiter retrograde in Cancer will deal with issues related to mother, fixed assets, building houses, comforts at home, education, reading new books, health of children, breakups in love affairs will be on your mind with problems from the past arising.
Jupiter also controls international currency values, gold etc which will drop prices for a while before picking up from next year.
Reigious activities will suddenly increase and also will aethism.
People will question existing beliefs, norms, traditions and try to apply their own logic to form new rules.
Aspect of exalted Mars on retrograde Jupiter will increase religious conflicts, more accidental deaths.
Mercury also goes retrograde during February 2015 which makes things like decision making, investements, speculation etc more complicated during that month.
If both Mercury and Jupiter signify benefic houses in your horoscope, then postpone all major decisions and plans to April 2015.
In general, aspect and transit of Jupiter should benefic those born with Moon in either Aslesha, Jyeshta or Revathi nakshatras.