Skip to content
In the base of the first (small) finger, which is also called the fore finger, lies the brain line, from behind the hand right above “ between the 1st and 2nd finger “ is a place limited by the imaginary line going down upto the brain line and is called the Jupiter Spot or place of the Jupiter. 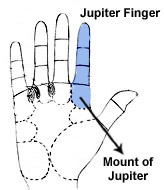 When we cast a glance on the palm of the hand then at place pit like or raised spots are visible. These raised spots signify a planet in particular. These are known by the name of Mounts. Many times a nice elevation is seen on the planet area in the palm and it appears that a certain mount is well developed, but in reality the basic qualities attributed to that mount are not seen in the individual. It so happens because the focal point of that mount has shifted from its place. When seen them a magnifying lens the focal point of a mount looks like as if a delta of rivers coming from 3 sides has been formed. If the centre point of this delta is regarded as the base of the mount then it can decided as to whether the point is at its place or is shifted on either side. If the point is at its place then all the qualities attributed to the mount will be present in the individual. If the focal point of the mount has shifted then either mixed qualities will be found or the qualities of that particular mount will be reduced or lessened.

A DETAILED INTRODUCTION OF MOUNT JUPITER

In case the effect of Mount Jupiter is more on an individual then he is well built, of medium to heavy physique (built), clear (fair) complexion, has seriousness (earnestness), has yellow colour, yellow eyes and one having an influential voice. There is an easy natural smile in their eyes. The pupils of the eyes, face and lips are big and a special attitude and seriousness is reflected in their persona.

Mount Jupiter dominated people give preference to position in comparison to money and apart from being ambitious are inclined in giving advice and instruction. These people especially love their family and wish to work within the limits (ambit) of the law. They do not like playing with the law.

1. If the mount Jupiter is high and developed, is beautiful in appearance then the individual apart from being of a self respecting nature is also ambitious. He likes only those tasks on which he has a monopoly. He takes interest in the field of politics and literature and maintains his domination in sports, business or professional fields which ever has come his way. In the event of it Mount Jupiter being over developed the individual turns out to be arrogant, ostentation loving and one who spends on false pomp and slow. Feelings of envy is in him and he does not miss any opportunity of letting down (degrading) others.

2. If along with Jupiter, the area (Mount) of Venus is also developed then the person as per his wishes achieves success in marital and love relations.

3. If Mount Jupiter is developed then the Capacity of giving sermons, speech is good. He becomes a social worker, benevolent or a political leader. He considers it his sacred duty to give advice and this quality of his is praised all around. He stands by his advice (statement) and also receives co-operation from the women class.

4. If the Jupiter Mount is subdued then the basic qualities related to it (Mount Jupiter) are unable to develop. The individual instead of haring an interest in religion has a feeling of misting towards it, and ambitious and qualities of leadership are not able to develop and also brings about a reduction in feelings of respect and honour towards elders.

5. If apart from Mount Jupiter being developed the fingers are also pointed then a special interest in mystical and astrological studies is created in an individual.

7. If the Mount Jupiter slips down wards then the individual is unable to succeed in his goals and forms a habit of taking hasty decisions and one can get an illegal tash fulfilled through him by giving an alleirement of bribe.

8. If Mount Jupiter is semi developed then the individual dislikes the interference of others in any of his affairs and is sentimental, but he has the capacity to adapt according to the situation (circumstances).

Triangle : If a triangle exists on Mount Jupiter and is perfect then that person is always a diplomat and is one who is desirous of his progress. If the triangle is imperfect then the person is selfish and arrogant .

Cross : If there is a sign of a cross on Mount Jupiter then the individual is one who does his work after giving a proper thought and is one who leads a comfortable life. He gets special wealth from his in laws and his wife is also educated. His family (domestic) life is also peaceful.

Spot : Spots occur in 4 colour viz. white, red, yellow and black. Black coloured spots are also as moles. White spots signify progress, red spots are indicators of diseases (ailments) and yellow colour spots signify the deficiency of blood. Black colour spots are regarded as harbingers of goddess lakshmi (wealth) but their outcomes have been defined differently as per the situation. They are both auspicious as well as inauspicious.

If the black mole is located on Mount Jupiter then obstacles in marriage arise regularly .That individual has to bear the blame in the field of love in the society and such a person does not achieve full success in life.

Circle : If the circle is situated on Mount Jupiter then the person is influential and succeeds in acquiring a high post through his efforts. Such a person gets a lot of co-operation from his in-laws.

Island : If the sign of the island exists on Mount Jupiter then such a person does not have trust in himself and he lacks in self confidence.

Square : Presence of square on Mount Jupiter is considered very auspicious. Such a person, inspite of being born in an ordinary family reaches to a very high post. Is a successful administrator and moreover his fame spreads all over the world and he gets a lot of respect and honour.

Mesh (Net) : A mesh (or a net) on Mount Jupiter has been regarded inauspicious. If the mesh (net) is located on Mount Jupiter then that individual is cruel by nature and does not have feelings of compassion in him. He is selfish and arrogant.

Star : If the auspicious sign of a personâ€™s constellation on Mount Jupiter is clear, distinct and flawless then the individual is highly ambitious and attains great success. That individual is definitely a high official and is very affable in the society and is also hospitable .