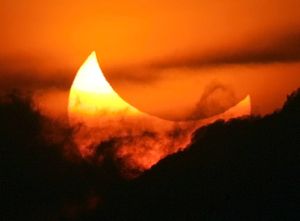 2012’s last solar eclipse will occur on 13-14 november 2012, beginning locally on November 14 west of the International Date Line over northern Australia, and ending on November 13 east of the date line off the western South American coast.
This total solar eclipse totality will be visible from northern Australia and the southern Pacific Ocean.
The most populous city to experience totality will be Cairns, which will experience 2 minutes of totality just an hour after daybreak (06:38 AEST, 20:38 UTC) with the sun at an altitude of just 14°.
Norfolk Island, a small pacific island east of Australia, will experience a partial eclipse with a maximum of 98% of the sun obscured at 09:37 NFT and an altitude of 42°.

This eclipse is occuring with sun about to leave libra and conjoin rahu in scoprio.
Parts of northern New Zealand will experience a partial eclipse. Auckland will have 87.0% of the sun obscured, whereas Wellington, Christchurch and Dunedin will respectively have 76.4%, 68.9% and 61.5% of the sun obscured. Maximum eclipse over New Zealand will occur around 10:30 NZDT (21:30 UTC), with Auckland at 10:28, Wellington at 10:34, Christchurch at 10:35 and Dunedin at 10:36.

People living in australia, newzealand will be most effected by this eclipse.
Sun conjunct with saturn in libra will cause low blood pressure and conjoining rahu will bring fatigue.
People with their moon placed in libra or scorpio during birthtime, will be the most effected.
Also people running through sun vimsottari dasa, born under simha lagna/rasi (ascendant/moon sign) will face some health hiccups next week.
Generally, effects are seen for about a month after solar eclipse.

Since this eclipse is not visible in Asia, Europe, Africa, North America, it won’t effect people living there.