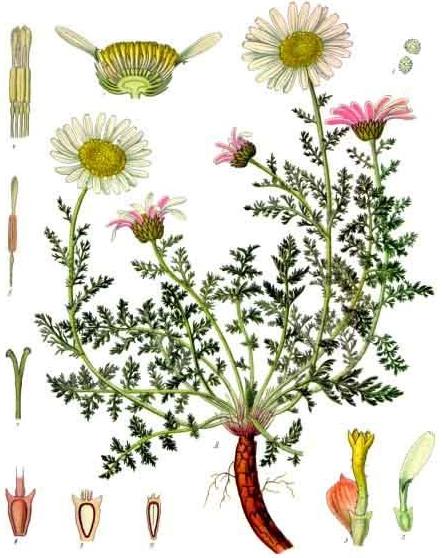 Anacyclus Pyrethrum is the scientific name of the medicinal plant known as Pellitory in English, Akarkara in Hindi, Akarakarra in Sanskrit, Akkalakarra in Telugu. It is also known as Mount atlas daisy and Spanish chamomile. It is a perennial shrub native to India, Arab and Spain. It grows to a height of 60 cm. The root of the plant is the main part used for medicinal usage. Pellitorin and Alkyl Amides are the main constituents of the root. The root is bitter tasting and when chewed stimulates saliva. Alkyl Amides has libido stimulant and neuro protective properties.

Akarkara or Pellitory has many uses but is primarily used as an aphrodisiac. Akarkara or Pellitory is also used for treating Tridosha, Asthama, Cough and excessive thirst among others. People suffering from acidity and ulcers should avoid its usage. Also usage beyond 1 month is not recommended. The maximum dosage is 10 gram or less. Consuming more can lead to nausea, bleeding and palpitation. Milk is an excellent antidote for its excess consumption.

Home Made Medicinal Usage of Pellitory Root or Akarkara

Take akalakar/Pellitory root and dry it. Grind it to a fine powder and eat 2 milligrams twice a day. This will cure chest pain, Joint pains, Finger pain and Body pains.

Obtain 10 grams of akarkara or Pellitory, 10 grams of Uttarene Samula churnam, 10 grams of boiled Asofoetida, 10 grams of Long pepper, 10 grams of fried Bengal gram powder and 5 grams of fried Cloves. Grind all of the above together and roll into small pills and store in a glass bottle. Eat 1 pill twice a day in the morning and evening. This will cure Asthma and Cough for sure.

Take equal quantities of Akarkara or Pellitory, Maerua Oblongifolia or Dumpa rashtram and dried Ginger powder. Put all of these in water and boil them. Let it cool. Take a mouthful of the lukewarm water in the mouth and gargle for a minute or two. This will cure all Tongue, Teeth and Throat disease and problems.

Obtain 10 grams of Akarkara or pellitory, 10 grams of dried Ginger powder and 10 grams of pepper. Grind all of these with water and make a paste. Apply this paste on the forehead to relive and cure headache.

Akarkara or Pellitory encourages saliva production. Hence people suffering from sore throat and dry mouth, should boil the root of Pellitory in water. Gargle the mouth with this water twice a day.

Take equal quantities of Akarkara or Pellitory, Black pepper, Edible Camphor, Ajwain or Hyoscyamus Niger, and salt. Massage the teeth and gums with these twice a day to relieve Toothache.

For Cold and Cough :

Take equal quantities of Akarkara or Pellitory, Black pepper and Long pepper and grind into a powder. Eat this thrice a day with water to cure Cold and cough.

For Delayed Speech Development in Children :

Massage the tongue of the child with 100 milligrams of Akarkara or Pellitory root powder mixed with honey. Do this for 5 minutes. Ask the child to swallow the medicine after massage. Do this twice a day especially before sleeping at night.

Akarkara or Pellitory should not be used by Pregnant and lactating Women. People suffering from Acidity, Gastric gas, Ulcers and inflammatory bowel disease should not use it.