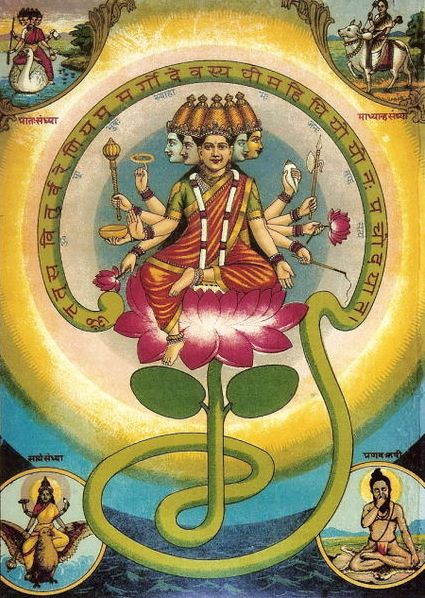 Gayatri Mantra is regarded as the most important and powerful mantra among all vedic mantras.
It was added to Rig Veda by sage Viswamitra.

:
Om bhuur bhuvah ssuvah : bhuur(earth) , bhuvah(sun), ssuvah(milkyway) are terms used here.
When a fan rotates at 900 RPM, it generates sound through wind. Similarly when infinite planets, solar systems, milyways rotate/revolve at speed of 20,000 times per second, they also generate a sound.
Sage Viswamitra tried to hear this sound through meditation and declared that this sound is the divine OM.

Sages of that generation concluded that this OM is ever generating and always existing sound in this creation and is a way GOD communicates with his creation.
Even in the sacred Bhagavadgita, Lord Krishna declared that Om iti ekaaksharam brahma, which means God with no shape can be worshipped through single sound OM.
Yogis call this sound as Udgati Naadam which is recited to reach Samaadhi during meditation.
It is added in begining of all other vedic mantras.

Dhiyo yo nah prachodayat : dhiyo(knowledge), yo(whoever), nah(to us), prachodayat(in proper channel/way).
Which means who gives us knowledge or shows us path to gain knowledge in proper way, he is god.

In this way, energy emitted from infinite milyways revolutions is spread all over this creation, which is called Pranavam.
This is similar to, K.E. = ½mv2.
Many mantras in vedas have added this powerful OM ahead of them and even many religions in world have made slight changes to this sound and adapted it to their prayers.