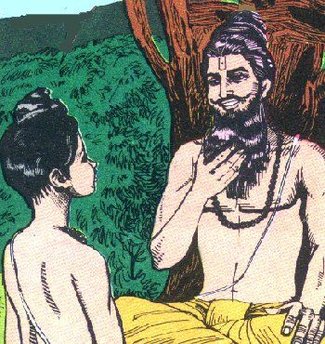 Such a primary standard can be the Veda. I know immediately the colours of your faces will change. Immediately you will blame Me that I am not the preacher of Universal Religion. You will misunderstand Me as the preacher of Hinduism in guise. This situation will arise even if I take the scripture of some other religion also as the primary standard. The misunderstanding is inevitable and unavoidable.

I have to take one scripture of some religion and I have to be subjected to the criticism. Therefore, I ignore the criticism. I know what I am in My inner consciousness. My inner self is the real witness as long as I am the preacher of Universal Religion to My inner self, I need not fear for any external criticism from any angle.

The reason for selecting Veda as the primary standard is that even today the Veda is being preserved by oral recitation with the help of thousands of families. If you go to older and older times millions of families were reciting Veda just to preserve it from any type of intrusions or deletions. In Indian spiritual field there are several branches of philosophy who fight with each other orally.

For all these branches, Veda is the standard text. Such situation never existed in any religion in this world and does not exist even today. Even today different schools of philosophy in Hinduism fight with each other and all of them quote the same Veda. Such competition was and is unique in Hinduism. In such competitive atmosphere pollution of Veda is impossible.

If any word is added or deleted, immediately the other schools will shout because they fear that in such case Veda may support a particular branch of philosophy due to the possibility of a new interpretation for a new sentence. Leave the past. Tell Me frankly whether such situation exists in any religion in this world even today. This is the main reason why I have selected Veda as the primary standard. The diversity in Hinduism has done lot of good in this direction.

The sanctity of the scripture is well protected. In the olden days the books were in the form of written scripts of palm leaves. Printing was not there. Therefore, a very few scripts were only present. In such case it was very easy to introduce a new palm leaf or to remove an older palm leaf because hardly one or two scripts were present in a very large region.

Except this one reason there is no any other reason for Me to favour Veda but you need not worry that the scriptures of other religions have to be judged with reference to Veda only. Fortunately, all the scriptures of all the religions agree with Veda. The primary standard is useful in very few places where there is disagreement. Even that disagreement arises only from the misinterpretation of the statement. If the correct interpretation is given all the statements are perfectly coinciding with Veda.

Therefore, I am not rubbing Veda on any head without the logical analysis. Therefore, one need not doubt about the fanatic. The primary standard means the original word of God heard directly. But when other scriptures are perfectly in agreement with such word where is the question of fanatic? Every scripture becomes the word of God.

This point supports the Universal Religion, which says that the single God delivered the scriptures of all the religions. When the author is one and the same how can there be difference between the scriptures? If there is any difference it is only by your misinterpretation. Therefore, primary standard is only for convenience but not for fanatic.