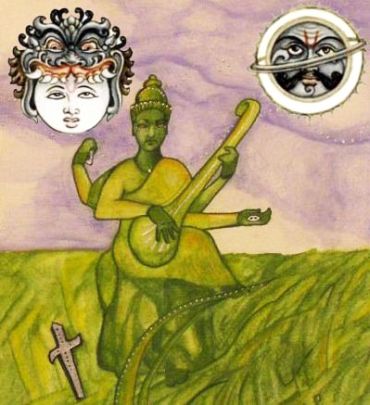 Biggest karmic planets Rahu and Saturn will be transiting same constellation (Swati Nakshatra) in Libra sign between 20 July – 04 November 2013.
The nodes (Rahu and Ketu) are chameleon like and take on the flavor of the planet they are closest to in proximity.
Rahu acts similar to Saturn and this conjunction increases its effects in Libra.
Saturn is a planet of hard work, discipline, routine, asceticism, old age, the cycles and rhythms of life.
Obey Saturn’s disciplined guidelines, and you will be in alignment, but if you disobey the Laws of Nature and he will make your life miserable.

That is why Libra (the balance) is his exalted sign, where he is most powerful.
Saturn in Libra stresses on our relationships, which are our mirror into ourselves.
They require time, effort, patience, perseverance which all are attributes of saturn and Libra being the 7th house in zodiac signifies this aspect very well.
Libra, the 7th house everything to do with life partners, sexual relationships, business partners, oppositions and even death.
Rahu shows insatiable worldly appetite, desires and attitudes and though it tries to deliver results like saturn, it gives them swiftly unlike saturn.
It can bring sudden changes, shocks, upheavals, even quick boons. These two planets together in same sign and more in same nakshatra indicate storm energy.

The rule with Rahu is, what he gives, he will take away. Unless you change or transform what he gives you in some way, it won’t last. While, Saturn makes sure that you work hard towards the result and it stays for a long time.

Now with both these planets in Swati constellation, which is owned by Rahu, the results will be more Rahu like !
People will get impatient, try to break rules and expect quicker results through shortcuts.
Politically this is bad time for India, which has both these planets transiting its 7th house.
Unrest in society, revolutions in states against government, demand for smaller states becoming violent (due to aspect of Mars in september-october) and uncontrollable, economic downfall, financial crimes, sexual crimes will increase.
Border related tensions will also increase.

Climatic conditions will be worse as rainfall will be uneven and useless in many places.
Floods will effect coastal areas severely.
Prices of petroleum and natural gas products will increase. Few politicians will face setbacks in courts and will even get arrested or atleast lose their positions.
Tsunami will effect islands in Indian and Pacific oceans.
Due to political instability, few cities will see riots but will be controlled by local police.
Politicians will keep changing parties and more students will commit suicides.
Infact suicide tendency for no proper reason will increase among youth.

Gold and Silver prices will dip to their lowest in recent times but will soon pickup as saturn moves towards Visakha constellation.
Inflation will increase and share market will be volatile. Its better to postpone new investments till november.

Many elder politicians and celebrities will either fadeout or die.

The dynamic of Rahu in conjunction with steady Saturn is asking us to grow and mature.
‘When we resist change, it’s called suffering‘. So its important to understand how situations around us are changing and to adapt, else perish.

The most effected people at personal level by this conjunction will be those who are having Shapit (Cursed) Yoga in their horoscopes.
This cursed yoga occurs when Rahu is either conjunct Saturn or aspected by him (Rahu being in same sign or in 3,7,10 signs counted from Saturn and if Saturn is in retrograde motion, then count in anti-clockwise direction).

This Shapit Yoga is most of the times hereditary and one can consider themselves lucky if they don’t have, despite parents suffering from it.
If one notices such combination in their chart, it is advisable to avoid all major financial transactions, start of new ventures, purchase of new/old vehicles, travel to long distances, litigations, legal issues etc during this period of rahu-saturn conjunction in same nakshatra.

Usually when two sons in a family go through either saturn or rahu mahadasa and such conjunct periods occur, death of one elder person in family takes place.
So, its important to take proper healthcare of elders in family.
Only Jupiter’s positive aspect on these two planets is reducing the ill-effects to certain extent.
So, people with powerfully placed jupiter and its favorable transit in Gemini, can expect some relief from sani-rahu.