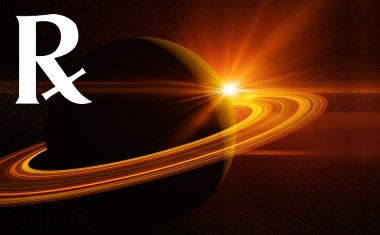 During its entire retograde motion, Saturn will be travelling between Visakha nakshatra’s 3rd quarter(paada) and 1st quarter.
Right now, Saturn has already entered stationary zone in february 2014 and it will not progress (very negligible movement).

Saturn going retrograde will slow down the rate at which our daily lives run and will give us time for introspection, so that we can develop better strategies for future.
When Saturn is stationary and retrograde (February-July 2014), it is NOT the best period to take political decisions, pass new bills, make new laws, adjust policies, make new promises etc.
Instead, this period should be used to discuss, review and debate on existing conditions and major decisions should be taken after 20 july 2014.
Any hurried decision taken now will lead to long term damage and will make us review it multiple times.
Already with Mars and Jupiter in retrograde motion, there is not much scope for any positive activity.

During the period when Saturn is transiting retrograde, it is essential that we go back and assess and solidify commitments made, projects started and responsibilities undertaken in the past. This must be done before we can continue. Saturn transiting retrograde provides the opportunity to reassess what we have taken on, to finally say NO, to back out of a commitment and to improve the organization of a project. While the process is going on, while you are working with what you have at hand, you should be warned against taking on any unnecessary responsibilities or long-range commitments.
Only deal with issues from the past; do NOT take on new ones.

Saturn is the ruler of Capricorn and associated with the 10th house. This means that any time Saturn stations you will find yourself thinking about your career goals, priorities and vision.
Depending on what houses are signified in your chart, saturn makes you look back at those issues during these 140 days.

If you are born with retrograde saturn or saturn placed/aspecting lagna (ascendant) in your horoscope, this period will test your patience.
It will also make you toil hard and pay less.
Rahu and Saturn moving in same direction in same sign will cause intensified experience of the results of past karma.

People born with any conjunctions or aspects between Mars, Rahu, Saturn (atleast two of them) in their birth chart, should be careful while driving or using weapons in March-April 2014.
Also their should undergo regular health checkups.
Retrograde Mars and Saturn conjunct Rahu in Libra, aspected by Ketu will cause fire accidents, electrical short circuits, damage to electronic equipments etc.

If you are going through Saturn’s Vimsottari dasa or Sani Dasa of 19 years or bhukti (sub-period) in any other dasa, or saturn signifying your dasa/bhukti lord, you will experience severe delays and postponements in all major work you undertake in these 5 months.

People born under ascendants and moon signs of Pisces, Aries, Gemini, Virgo, Libra, Scorpio are advised to lay low now and start new plans when Saturn gets back into progressive mode and Jupiter enters its favorable and exalted sign Cancer in second half of 2014.