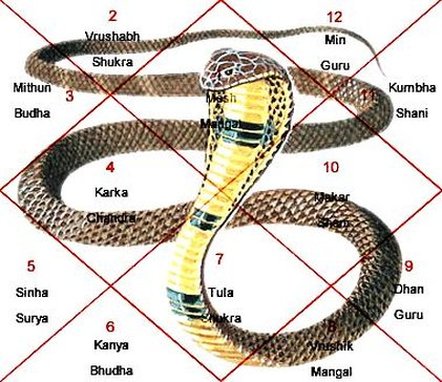 Vedic Astrology Effects of Savya Kala Sarpa Dosha 2019 or Yoga occuring during 02 July-14 December. India-Pakistan border issue, Terrorism, Surgical Strikes
Kala Sarpa Dosha 2019 (all remaining planets stuck in between Rahu, Ketu) will occur for 15 days each month during July and December.
This is a Savya Kalasarpa Yoga/Dosha, where 7 planets are moving towards the tail (Ketu) and trying to exit out.
Although Moon will move just out of Ketu for 15 days each month, the effect will last for entire day until moon transits to next constellation (Nakshatra).
This is different from Sarpa or Naga Dosha

Savya Kalasarpa Yoga/Dosha, in experience has given more trouble for places, businesses and countries, rather than individual persons.
Those nations which have Savya Kalasarpa Yoga/Dosha in their independence chart are more prone to ill-effects of Rahu and Ketu.
India and Pakistan are examples of such Savya Kalasarpa Dosha effected countries.
During July-December 2019, relations for these countries with neighbours will be badly effected.
War-like situation across border will prevail. Internal conflicts, terrorism, corruption will try to disturb functioning of government.
2 Major eclipses occuring during July 2019 will cause natural calamities like floods, road and water accidents.
Few countries can experience flight accidents. Earthquake will cause severe damage in Eastern countries.
Dates during which Kala Sarpa Dosha 2019 (partial and full) will occur are :

During the previous Kala Sarpa Dosha period in 2016, Terrorists from Pakistan attacked Indian army camp at Uri. Within 11 days, Indian Army conducted surgical strikes against suspected militants in Pakistani-administered Kashmir.
In 2017 and 2018 too, during Kalasarpa Dosha dates, there were tensions across India-Pakistan border and militant activities in Kashmir.
4 planets combination (Sun, Mars, Venus, Mercury) in Virgo from 25 September 2019 will make it tough for Meena, Vrishabha, Mithuna, Kanya, Thula, Dhanus and Kumbha rasi born for coming 3 weeks.
If you were born in Simha Lagna (Leo Ascendant), there can be sudden and major positive breakthroughs in career between September-October 2019.
People with Kala Sarpa Dosha in birth charts, can lose money in litigations, suffer from setbacks in love and relations, lose or quit jobs during July-December 2019.
Kids born during these dates can suffer from weak immunity, heart or lung diseases, weak nervous system and bones, arthiritis, fickle mind.
Venus entering Capricorn (Makara Rasi) ends Kala Sarpa Dosha 2019 effects.

As Gemini and Sagittarius are 3rd and 9th houses of Kaalapurusha in zodiac, people below 36 years of age will be effected more.
(Refer to 12 Types of Kala Sarpa Dosha)
People who have invested heavily in real-estate and stock exchange will lose suddenly. Loss of jobs, low life can be expected for those under 36 age and if born with kalasarpa dosha in their horoscope.
Frequent travels, changes at work place can be irritating.

There will be Efforts to impeach Donald Trump before his term ends due to Kala Sarpa Yoga occuring multiple times in 2019-2020.