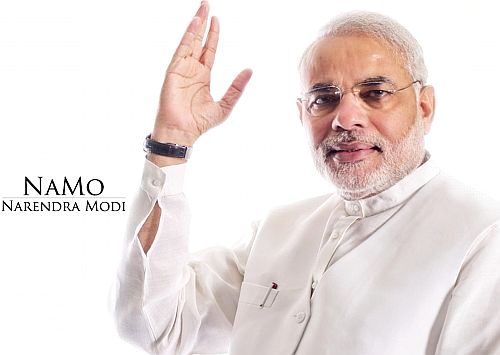 Gujarat Chief Minister and BJP leader Narendra Damodardas Modi is promoted as Prime Minsterial candidate for 2014 Lok Sabha elections in India.
He was born on 17th September 1950 in Vadnagar, Gujarat in Tula Lagna and Vrishchik Rashi.
He was passing through Venus mahadasha between 1986-2006 during which he rose to power of strength in his state and in his state as venus is powerfully placed in 11th house with yogakaarak planet Saturn.

Narendra Modi faced enquiry from SIT(Special Investigation Team) on allegations that he supported and encouraged communal riots during 2002 in Gujarat and this investigation happened during his Sun dasa (2006-2012)which was his toughest period in political career.
However, during his Moon (Chandra) dasa, he was cleared from this case and is now aspiring to lead India as Prime Minister.

His Dasha of Sun-Moon-Mars during 2007 elections have helped him regain power in state but he couldn’t contribute as much was expected in MP seats.
His sun is placed in 12th house on own constellation, uttaraphalguni and conjunct with ketu and Mercury(R).
This made his life tough till september 2012 with cases, investigations and allegations.

He will continue to play important and active role in BJP and state level politics.
After 2012, during his moon dasha, he was given much bigger responsibility.
He will continue in politics till 2014 and after that between 2014-16, during his sade-sathi, saturn transits his moon signwith ‘0’ (zero) points in ashtakavarga, he will face security issues and life threats.
He has to be careful during that Dasha to survive and play much important role in future.

Narendra Modi horoscope indicated strong chance to become Prime Minister of India in 2014 with support of NDA’s alliance parties, but there will be continued threat on his life in between November 2014 – January 2017.
Also, India’s natal chart indicates collapse of Lok Sabha formed in 2014 during above period (when Saturn transits Scorpio and Jupiter transits in between Leo & Virgo).

Unless Modi takes complete security measures and performs remedies to cross these tough years of 2015 and 2016, he will not be able to serve full term of 5 years as India’s Prime Minister.