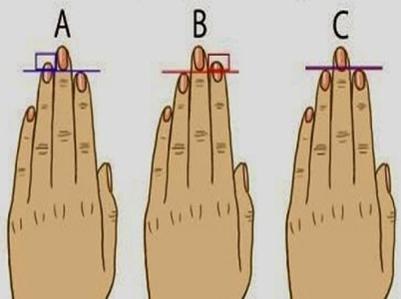 Length of Fingers and Personality are inter-linked along with intelligence of a person.
Examining middle three fingers on active hand (right or left, whichever is used to write/sign etc) will give an idea of what a person could be.
Long fingers signify a detail-oriented idea person. They think things through completely and tend to be critical of small details.
Short fingers signify a physically-oriented big picture person. They focus on real world items; usually in an overall manner.

Long index finger indicates a natural leader. They are used to responsibility and have high standards for themselves and others. They tend to be drawn to self-reflection whether it is keeping a journal, therapy, or an interest in astrology or palm reading.
A short index finger indicates a lower self-esteem. They may hide behind a persona they create and have trouble expressing their true feelings and thoughts. They are more likely to suffer from health issues that stem from self neglect such as smoking, alcoholism or unhealthy eating habits.
A long middle finger is found on a person who takes rules seriously. They respect not only the letter of the law, but also the intent behind it. They are serious, and can sometimes be called boring.
A short middle finger indicates a free spirit who marches to the beat of their own drum. Alternative paths seem highly attractive.
A difference between the dominant and non-dominant hands shows a difference in attitude between career (active hand) and family (passive hand).
A long pinkie finger indicates good communication skills and a natural ability with money.
A short pinkie finger indicates a difficulty in expressing yourself. Developing the ability to communicate effectively may seem more difficult, but will greatly help to relieve frustration.
A low-set pinkie can indicate the need for a supportive father figure.
Short thumbs indicate a lower ability to stick things out when they get tough.
Long thumbs indicate high levels of self discipline and perseverance.
Stiff fingers indicate stubbornness and significant mental willpower. Once you make up your mind about something, you are not open to changing it.
Flexible fingers indicate an impressionable and spontaneous mind. New ideas are welcome, and you may change your mind with each new viewpoint pointed out to you.
If your middle finger and the index finger stick close together, it shows that you will gain authority and rank through your own goals and dreams. If they stand apart, then your position will come from other means.
An art related life is shown when the ring finger sticks close to the middle finger. Your fate will also aid in your success.
An independent mind is signified when your little finger stands apart from the ring finger, with a great deal of space between them.

If a person has a longer ring finger, which means if it is longer than their index finger then he/she are blessed with a charming personality. Such is their prowess that they can talk yourself out of given situation and leave scot-free!
People are obviously charmed by them and they wish to follow them everywhere.
They are quite the risk taker and are seemingly good at solving problems too.
Given their skill-set, they are mostly likely to pick professions like engineering, detectives, police, army or special arms forces.

Longer index finger points at supreme confidence (read overconfidence). So if a person’s index finger is longer than the other two fingers in question, they are a confident person.
However, they need to keep this trait in check as it does border on arrogance at times. Nevertheless, this characteristic comes very handy when completing a project.
They look forward to achieving their goals and stay focussed when it comes to realizing their dreams.

If a person’s ring finger and the index finger are of the same length, then just like the balance in length, they love balance.
In short, they are the peacemakers!
They hate conflict and wish to maintain peace between friends, family and even strangers. Y
They are well-organised just like their mind is.
However, people often mistake them for being docile but there is a fiery mind within that can lash out suddenly if pushed too far!