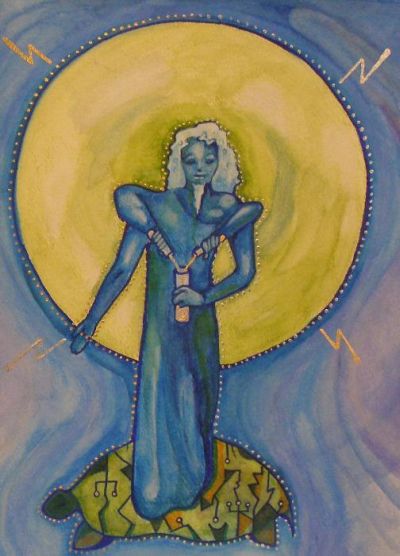 Satabhisha 6-40′ to 20-00′ Aquarius
General Characteristics: harsh in their speech but truthful, suffer grief but conquer enemies, thoughtlessly engage in works, independent ways.
Translation: The hundred healers.
Symbol: An ox cart, a circle or round charm.

Physical features: He will have a soft body, excellent memory power, wide forehead, attractive eyes, bright countenance, prominent nose and bulged abdomen. He would appear to belong to a aristocratic family at the first sight itself.

Character and general events: He is of the type “Satyameva Jayate (Truth always wins)“.
He will not hesitate to sacrifice his own life for upholding the truth. As he is born with certain principles, he has to quite often confront with others as he cannot deviate from his principles of life. Selfless service is his motto. He insists on following the religious traditions. He is also of the adamant type. Once he takes a decision it is not easy for others to change his decision. While he is very intelligent and efficient in most of the walks of life, he is very soft in his heart. He is the mixture of good and bad.

When he is provoked, he will rise like a bulldog, but that anger is soon subsided. As he does not believe in pomp and show, he has a feeling of shyness to exhibit his talents. However, his talents will be unearthed due to his interesting and attractive conversation, which will be highly instructive and educative.

Education, sources of income/profession: Period upto 34 years of age will be a trial some period in his profession field. Period after 34 years will be the period of constant progress. He is highly suited for the practice of astrology, psychology and healing arts. His literary capacity and greatness will come to limelight even when he is very young. He is capable of acquiring very fine and high education. This Nakshatra has produced eminent doctors and research fellows in medicines.

Family life: Generally he has to face a lot of problems from his dear and near ones. Even then, he always extents his helping hand to his near and dears even without asking for such help. It has been noticed that native has to undergo maximum mental agony due to his brothers. He cannot also enjoy much benefit from his father, whereas full love and affection is derived from his mother.

Health: Outwardly he may appear to have very good health but it is not like that. He cannot tolerate even the slightest affliction to the body. He is prone to urinary diseases, breathing trouble and diabetics. As he is too much inclined in the sexual pleasures, he may have sexually transmitted diseases. Even though he may keep illicit relationship with other females it will be kept a secret from all. He may have problems with his jaws. He is also liable to suffer from colic troubles and must take precautions to protect himself from the diseases incidental to exposure to cold weather.

Character and general events: She will be very calm natured. But at certain times she is also hot-tempered. She is very much inclined in the religious activities as she is god fearing. Due to her hot-temperament, she is mostly confronted with family quarrel and this will result in frequent lack of mental peace.
She has very good memory. She is highly sympathetic and generous. While she does not expect anything in return for her humanitarian action, she is quite often misunderstood not only by the general public but also by her own family members.

Education, sources of income/profession: Interested in the scientific study. Percentage wise assessment shows that most of the female doctors are born in this Nakshatra.

Family life: While she loves and adore her husband, her life will be full of problems. Sometimes long separation from her husband or widowhood has also been noticed.

Health: Her health will be a cause of concern for her. Urinary and uterus disorders have been noticed. She may also suffer from colic troubles and chest pain.

Negative Traits: Lonesomeness, melancholic, lacks self confidence, restricted, life is duty, quiet yet will blurt things out in an unrefined manner, con artist, unstable, argumentative, uncommunicative, hides their true intentions, miser, dependent on others to meet their needs, problems in relationships, feels intensely restrained or mentally anguished, problematic relationships with children and siblings, secretive – keep weaknesses to themselves, lack self confidence, stubborn.

Compatibility and Incompatibility: Represented by the ‘yoni’ of male horse and female horse respectively; Aswini and Satabhisha are instinctively compatible. Likewise with horses’ instinctive compatibility to snake and monkey; the nakshatra is also compatible to Rohini, Mrigasira, Poorvashada and Sravana nakshatras. Bearing in mind, the Nakshatra’s instinctive inimicality with buffalo; both Hastha and Swati nakshatras are incompatible to it. According to the principle of ‘Veda dosha’ also Satabhisha and Hastha are mutually incompatible.