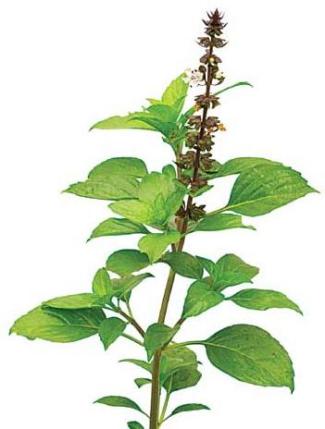 Holy basil, popularly known as “Tulasi” or “[Tul (comparable) +Asi (not) ]The Incomparable one”.
It is also known as Ocimum tenuiflorum or Ocimum sanctum. Tulasi is one of the most sacred plants in India. In Hindu mythology tulasi is compared as goddess Lakshmi, the wife of Lord Vishnu.
This is an aromatic plant which is native to the Indian subcontinent and widespread as a cultivated plant throughout the Southeast Asian tropics.
It is a many branched subshrub which grows 12-24 inches tall with hairy stems and green and purple leaves that are strongly scented.
This herb has been valued for centuries due to its benefits for the mind, body and spirit.
It is a member of mint family. Though it is closely relatd to the sweet basil, Holy basil has a much richer history. It has recently gained popularity in United States even though it has been grown in India for thousands of years as a part of vedic custom.

In Ayurveda medicine, tulasi is considered as a key ingredient. It has Vitamin C, Vitamin A, phytonutrients and the essential oils which are excellent anti-oxidants and protects the body from nearly all the damages caused by the free radicals.
Tulasi is mentioned in the Charaka Samhita, an ancient Ayurvedic text.
Tulasi is considered to be an adaptogen, balancing different processes in the body, and helpful for adapting to stress.
Marked by its strong aroma and astringent taste, it is regarded in Ayurveda as a kind of “elixir of life” and believed to promote longevity.

In a research study, they discovered that 3% concentration of Tulasi oil is most effective against bacteria that cause Acne. It was also found that the primary compound of Tulasi oil is Eugenol, which is primarily found in clove oil.

Tulasi has many significant anti-inflammatory and immune boosting properties that protect against fever, pain, stress and protect vital organs like the liver. It also cures ulcer in the mouth. It also controls the growth of oral cancel caused by chewing pan and tobacco etc. It is an excellent antibiotic, germicidal, fungicidal and disinfectant and very efficiently protects our body from almost all sorts of bacterial, viral and fungal infections.

Additionally, Tulasi prevents radiation induced DNA damage, chemical induced skin, liver, oral and lung cancers. It’s actually remarkable to consider that one plant has been proven to not only kill cancer, but prevents it and even protects the body from dangerous cancer treatment thus making it a natural cancer treatment.
Tulasi leaves act as an anti-stress agent. Studies have shown that the leaves afford significant protection against stress. A healthy person can chew 10 to 12 leaves of tulasi leaves, twice a day, to prevent stress.
Tulasi leaves has the ability to control blood glucose and operate as a natural remedy for diabetes. In addition to managing diabetes by controlling blood sugar levels, it also lowers the dangerous elevated cortisol levels. Supplementing with Tulasi leaves has been found to reduce anxiety and emotional stress.

Tulasi tree is made into small beads as a part of Mala and infact it is the only wood mala used in yoga because it holds and concentrates energy, and also tranquilises the mind while rotating it on fingers during meditation.

Recently research scientists at Rajasthan University have discovered that Tulasi can replace some of the more expensive alternatives to fluoride removal.
They did and experiment in a village of Narketpally Mandal, Telangana state, India by soaking 75 mg of Holy Basil leaves in 100ml of water that had over 7 parts per million of fluoride. After soaking the leaves in the water for a mere 8 hours, the fluoride was reduced to just 1.1 parts per million.
The WHO says that ‘safe’ levels of fluoride in water are no higher than 1 part per million.