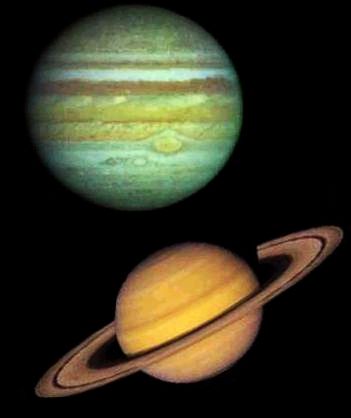 Jupiter (Brihaspati) and Saturn (Sani) are in their respective exalted signs at same time and this rare phenomenon occured after almost 60 years.
This unique twin-exaltation of slow moving, yet powerful and influential planets will have ‘destiny changing‘ effect on individual horoscopes, countries and few businesses.

Jupiter takes 12 years to complete one cycle of transiting all zodiac signs and Saturn takes 30 years to go through same cycle, they both transit their respective exalted signs only once in 60 years.
Last time, they both were exalted during 1954-55 and many influential and blessed people were born during that period.

According to Vedic Astrology, Saturn is already transiting its exalted sign Libra and would go in direct motion after 20 July 2014 in Jupiter owned constellation Visakha.
Meanwhile, Jupiter entered its exalted sign Cancer on 18 June 2014, after 12 years.
Jupiter will be transiting in Saturn owned Pushyami nakshatra (constellation) from 04 July 2014.
This interchange of constellations (nakshatra parivartana) will make both planets exchange the process of delivering their effects.

Jupiter is a giver, a planet of ‘expansion‘. It expands and grows all aspect of life it touches and it is also the planet of family, finances, wisdom, knowledge, comfort & luck.
Saturn, on the other hand is the planet of constriction.
This unique combination of expansion & constriction during 18 June till 31 October 2014, will be a celestial symphony which will be full of opportunities & hurdles thrown in together.
Most of these effects can be experienced during July-August as both planets are under interchange of constellations (till 03 September 2014).

This twin exaltation will have a very strong impact on world economies, economic progress in general, food & land inflation, our own fortune, opportunities and hurdles in our personal charts.
Depending on significations of both these planets in one’s personal horoscope, this combination will balance the ratio of oppurtunities : hurdles.
If Jupiter’s transit in cancer is more stronger for you, then oppurtunities and blessings will be more compared to number of hurdles.

However, Saturn will be leaving Libra on 01 November 2014, so its effect won’t be long enough now and Jupiter will continue its effect till July 2015.

For a major event to occur in someone’s life, their related karma should be activated to yield results.
Saturn is the major deciding factor who released effect of Karma and gives permission for that event.
Jupiter blesses the event by his transit.
Sun plans it and Moon executes it on its day related to significators of that event.

Example : If a person is destined to get married or get a big break in career during a dasa and significators controlling that event are Saturn, Venus, Moon, Mercury.
Then during their exalted transit, Jupiter and Saturn will deliver that karma when Sun and Moon co-operate with their transits during next 4 months.
So, expect some big life turning changes coming your way soon with Jupiter and Saturn exalted.

Generally, if you are born under moon signs or ascendants of Gemini, Virgo, Scorpio, Capricorn and Pisces, then this twin exaltation will prove more beneficial with hurdles turning into useful experiences for upcoming opportunities.
This will be testing period for Cancerians, Leos, Librans and Sagittarians.
Others can expect mixed results.