Jupiter Combust 2021 happens between 15 January (05:03 hrs IST) and 12 February (11:05 hrs IST).
During this Jupiter combust 2021, it gets within 11 degrees to Sun and loses its power to deliver positive or negative effects on our planet. 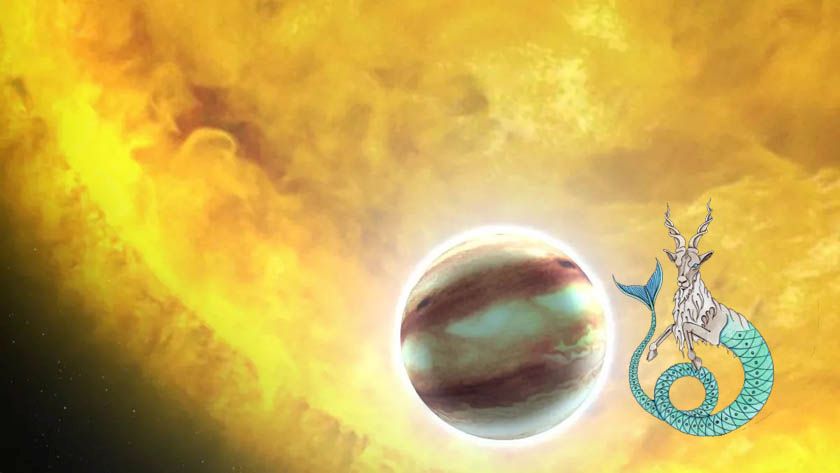 During this period of Guru Moudyami, positive effects of Jupiter (Brihaspati) will be drastically reduced and people who follow vedic astrology, do not perform any auspicious ceremonies such as buying and selling of properties, initiation of new mantra, weddings, engagements, house warming, launching of new business, new constructions etc.
During these 27 days, Mercury will be conjunct Jupiter and combust due to Sun between 02-15 February 2021.
Saturn will also be combust during 07 January – 10 February 2021.
Jupiter-Mercury conjunction is good in general for financial institutions, gold market, but as they both remain combust around same time, these businessess will suffer setbacks.
Saturn combust will postpone the release of karma for those who are going through Vimsottari dasa of Sun.
Logical thinking will reduce and decision making can get difficult. Students can get confused, especially in competitive exams.
Jupiter Combust 2021 can bring down gold price, reduces positive energy on earth, sensitive human relations, helping nature among humans, philanthropy, love etc.

Jupiter Saturn conjunction in Capricorn can restrict our expansive thoughts.
All BIG plans, ideas will take back step due to this conjunction and also Jupiter being combust.
During combustion, people will get frustrated due to economic restrictions, failure to execute financial plans.
When Jupiter remains ineffective, bad karmic planets like Rahu, Ketu, Saturn and Mars takeover and give their results at the maximum level.
And unluckily this year, most of the Jupiter is either conjunct or in either signs of Saturn, which makes it weak.

Corruption will be at peak and people born under moon signs of Aries, Taurus, Cancer, Virgo, Sagittarius and Capricorn will have to forcefully take part in it.
Pisces, Leo, Libra, Scorpio need to lay low and postpone all big plans to 2nd half of 2021 as Venus combustion follows Jupiter combustion during February-April.
Gemini and Aquarius should avoid all legal issues, arguments, litigations and new ventures.
Justice will be denied and people will feel that they were cheated openly.
These 27 days are only suitable for planning, re-arranging, discussions but not for starting or executing any idea.
If you are expecting a major positive turnaround in your life, then you better wait or postpone your plan until mid-April 2021. Finalization of all major deals better be postponed to beyond that date.

Jupiter expects you to stick to moral values, justice and dharma at all times.
Those who retain their Dharma during this period, will be suitably rewarded during 2nd half of 2021.

Murphy’s Law is in force this month

If something can go wrong, it will go wrong !
All impulsive decisions taken during January-June 2021 will backfire and prove you wrong !
Those into finance business must realize that this is not the best time to recover loans.
If you are born with combust Jupiter (Guru) in your horoscope, then all positivity and hope will diminish during these 28 days.

Saturn Jupiter conjunction along with Sun can also cause low blood pressure, respiratory problems, asthma attacks.
People with such diseases and Hypoglycaemia need to take care of themselves during these 4 weeks.

Wednesday January 13: Mars square Saturn AND Venus trine Uranus: Make an extra effort today to avoid arguments and discord. Instead, have a good time by doing something new and different.

Thursday January 14: Sun conjunct Pluto and enters Capricorn: If you feel overwhelmed today, clean up and start throwing things out. That will drain off the Pluto energy.

Sunday January 17: Jupiter square Mars: Yes, that may be a brilliant idea you just came up with. But is needs work. Don’t rush into it. Sit down and think it over again before you charge forward.

Wednesday January 20: Mars conjunct Uranus: NOT a good day for new USA president to take oath ! Mars/Uranus conjunction is accident prone. It makes people charge ahead when they should not. Saturn is squaring both of them.

Saturday January 23: Mars square Jupiter AND Venus sextile Neptune AND Sun conjunct Saturn: Be careful of taking on too much (Mars/Jupiter) and overworking (Sun/Saturn). Take a little extra time off today for relaxation (Venus/Neptune). See a romantic movie.

Sunday January 24: Mercury Trine Rahu: This helps you figure out how to change things for the better.

Tuesday January 26: Sun square Uranus: Slow down! That idea you just had may be brilliant, but it needs work. Think before you act.

Thursday January 28: Venus conjunct Pluto AND Sun conjunct Jupiter: Venus/Pluto builds up intensity in relationships. Sun/Jupiter can be a tendency to take on too much. A little moderation would go a long way today.