Jupiter, the largest benefic planet which also controls financial businesses, family relations, gold price fluctuations, social justice, sugar and fat in body etc will be entering into Libra (Thula Rasi) on 11 September 2017 at 18:08 IST according to K.P Ayanamsa.
It will remain in Libra till 11 October 2018 (06:48 IST) and during these 13 months, it will give positive effects for people born under moon signs and Ascendants of Aries, Gemini, Virgo, Sagittarius and Aquarius.
Adverse effects will be seen for those born in Moon Signs and Ascendants of Pisces, Scorpio, Capricorn .
For other signs, it will deliver mixed results based on transit of their respective sign lord(s). 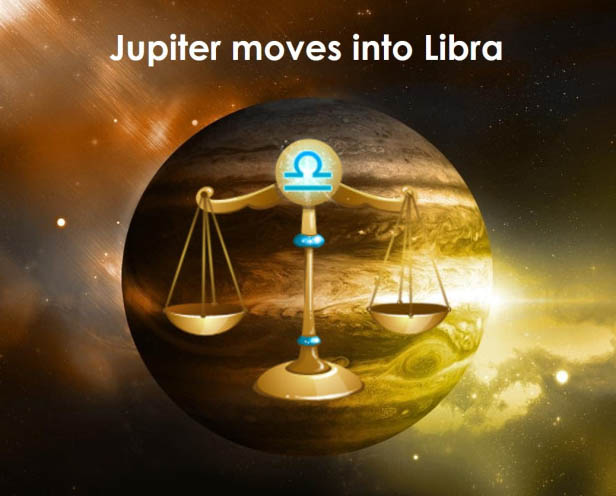 Full Moon in Aquarius (Kumbha Rasi) happens 6 days before Jupiter moves into Libra.
This is good for Aries, Gemini, Libra and Capricorn born people. Emotions should be kept under control during this month. Be careful while communicating because 4 planets cluster Mars. Mercury, Sun, Rahu are conjunct each other, with Venus fast approaching them.
Do not fall prey to emotional blackmailing, dramas, stories created by others around you.
Libra is an Air sign and in Libra, Jupiter expands our awareness of our partnerships, the necessity to slip into the shoes of others, and our diplomacy skills.
Jupiter in Libra encourages togetherness, equality, compromise, fairness, partnership, peace, harmony, and diplomacy.
Also, Jupiter in Airy Libra makes us mentally adventurous, less attached to values and more open minded.
As Libra is a balance sign, Jupiter the planet of Justice, makes us see both sides of any argument.

These 13 months will be the best time if someone is trying to find Love.
Especially, when Jupiter transits its own nakshatra, Visakha during 15 December 2017 – 19 June 2018 and again from 01 August 2018, many people will be blessed with new found relations, progeny, new oppurtunities to showcase your creativity or talent, expansion of social circle, financial growth.
Libra is the 7th house of the zodiac and rules partnerships of all kinds – marriage, business partnerships, long term friendships, justice, balance, being wanted and desired both in your personal and your professional life.
If Jupiter in Leo (during 2015-16) has given you new love, then Jupiter in Libra (2017-18) will definitely make you enter into a relationship.
Libra is ruled by Venus, the planet of Love, Glamour, Beauty and Creativity. Similar to Leo, Libra also wants to be recognised and appreceated, or rather pampered.

During the retrograde period of Jupiter in Libra, 09 March -10 July 2018, there can be few breakups, reconciliations, and new pairings.
Jupiter can expand the negative qualities of a sign, just as it can expand the positive traits.
With Jupiter in Libra, we focus too much on people pleasing, the idea of having a relationship instead of real needs and the people involved, or superficial connections, and not enough attention to the quality of our attachments.
There will be many attractions, crushes, infatuations and few very of them can happen at soul level.
Love marriages will increase. Many, who stayed single for long time, will decide to enter into a long term relation.

Jupiter in Libra, can make us worried about what others think and pay less attention to our own independent needs.
While Jupiter tends to push for expansion and can be decidedly immoderate. We should certainly watch for overdoing, overstating, and excess in our relationships which can challenge the very balance that we seek.
Jupiter rules legal matters and Libra rules justice. So, we may see justice working in our favour – either in an actual legal case or else universal justice stepping in for us.
Many legal battles will be settled in favor of justice deserving people.
People will be more aware of injustice, unfairness and inequality around them.
If you get an oppurtunity to collaborate with others for a project, then these 13 months are the best time.
Try to achieve balance in everything – Relations, money, time, work, justice, love etc.
During retrograde period of Saturn in Sagittarius (April-September 2018), it will aspect Jupiter in Libra and that is when Justice will be delivered to many.

USA will be effected economically and politically. North Korea and China will become uncontrollable.
China’s economy will grow with more exports.
India will be able to control cross-border terrorism to large extent, but attacks will continue.
Europe will continue to suffer from immigrants. UK will be effected the most.
Stock market investments can be risky this year. Gold Price will increase.