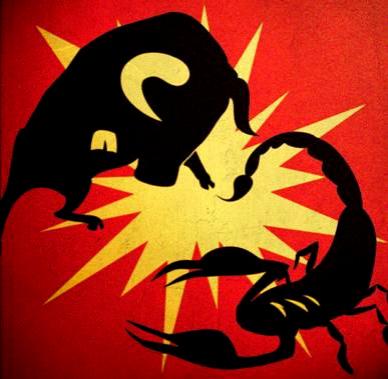 5 planets, Saturn, Mercury, Sun, Moon and Jupiter would be aspecting Taurus sign during 14-17 November 2016 to cause financial chaos.
Mercury has already joined Saturn in Scorpio and Sun would be joining them on 15 November.
The full moon on 14 november in Aries ends with Moon going into Taurus on 15th to be aspected by these 3 planets along with Jupiter in Virgo.

This full moon on a monday will make people in USA and India relax after exhausting past week.
However, those born in taurus ascendant and moon sign can face tough days as conflicting planets aspect them.
Financial crisis, fear of law enforcement can cause some sleepless nights.
Those born in scorpio ascendant and moon sign can also face some tough days while dealing with money, banks, loans etc.
Difference of opinion with elders, ill-health of someone in family, lack of rest, fear about future can be exprienced by them.
India’s Ascendant is Taurus, which is aspected by these 5 planets at same time and this makes matters tough for its citizens during mid november, till early december 2016.
Positive influence of Jupiter can save honest, educated and smart people.
Combination of Saturn and Sun in Scorpio will expose many corrupt persons and their crimes. However, Mercury in conjunction with them till end of this month can save few corrupt fora while.

United States of America, which was formed on 4 July 1776 at 17:10 in Philadelphia, Pennsylvania, has Scorpio Ascendant according to Indian Astrology.
The nation has just entered into Rahu dasa for the third time since its formation.
Transiting Rahu in its 10th house (Midheaven), indicates some tough decisions taken against corrption done in past.
But, the underlying corruption remains.
People protest against recent elections because the popular vote (saturn) did not match with electoral vote (sun).

Pakistan can suffer more as most planets transit its 8th house. Failure to control terrorism will hurt them.

Effects of Saturn, Mercury, Sun conjunct in Scorpio on Moon Signs during November-December 2016

Aries : Life will be hectic and you will made to pay for past mistakes.
Debts continue to increase but you will also see ways to clear them in installments.
Avoid all new offers of loans and take care of father’s health.

Taurus : Bad financial planning in past can show its effects on your present.
You may feel that many of your age have progressed in life and made lot of fortune but you were left behind in the race.
Family relations (with in-laws) will be strained.
Health of someone at home can make you bother.

Gemini : Health will be recovered, if some sickness was caused during past few weeks.
Except for conjugal bliss, life will remain in control. Partners, who were once helpful, can turn away now.
There can be sense of dissatisfaction.

Cancer : Money stuck for long time can be recovered. Your efforts to bring everything under control will be fruitful only to some extent.
You may have to attend some legal issues and court cases for the decisions made.

Leo : Minor injuries, skin allergies, low blood pressure can still effect you.
Sun conjunct Saturn is bad for your money and comforts.
There can be some financial loss.

Virgo : Your kith and kin, close associates can turn against you.
Most of them will start believing that you keep secrets to hurt others, while playing yourself safe.
Financial decisions will backfire.

Libra : Someone you never liked, but closely related, can either be hospitalized or pass away.
Arguments and confrontations can lead to enemity.
You will not like the decisions made by family members.

Scorpio : There will be some chaos regarding daily life and money.
By god’s grace (Jupiter in 11th house), everything will not be against you. There will be a small window of hope which enables you to keep going. Dust settles down and clear vision possible after 2 months.

Sagittarius : Tough and challenging period continues.
Heavy financial losses, fear of law enforcement, sleepless nights, fluctuations blood pressures and sugar levels can make you physically and mentally weak.
You may feel that some curse (planets in 12th house) has been cast upon.

Capricorn : Life remains normal, except for some minor worries which have temporary effect.
Your experience and expertise will be useful for others.

Aquarius : Financial crisis can suddenly hit you from middle of nowhere. However, family and friends can save you from complete drowning.
Work load can make you feel tired quickly. Nervous system will be effected.

Pisces : Sleepless nights of early november are over now. You will be more relaxed and focussed.
Travel will rejuvenate your soul and also give you much needed break from the routine.
Some financial losses will be compensated through other means.